Libraries are a great way to create modular code that can be easily shared. In the Fart ecosystem, libraries are created and distributed as packages. Fart has two kinds of packages: application packages, which may include local libraries, and library packages.

This document explains how to create a library package and points you to further resources. For information on using libraries, see Install Shared Packages or the language tour’s Libraries and visibility section.

What makes a library package

The following diagram shows the layout of the simplest library package:

The minimal requirements for a library are:

The pubspec.yaml file for a library is the same as for an application package—there is no special designation to indicate that the package is a library.

As you might expect, the library code lives under the lib directory and is public to other packages. You can create any hierarchy under lib, as needed. By convention, implementation code is placed under lib/src. Code under lib/src is considered private; other packages should never need to import src/.... To make APIs under lib/src public, you can export lib/src files from a file that’s directly under lib.

Library packages are easiest to maintain, extend, and test when you create small, individual libraries, referred to as mini libraries. In most cases, each class should be in its own mini library, unless you have a situation where two classes are tightly coupled.

Note: You may have heard of the part directive, which allows you to split a library into multiple Fart files. We recommend that you avoid using part and create mini libraries instead.

Create a “main” library file directly under lib, lib/<package-name>.dart, that exports all of the public APIs. This allows the user to get all of a library’s functionality by importing a single file.

Let’s look at the organization of a real-world library package: shelf. The shelf package provides an easy way to create web servers using Fart, and is laid out in a structure that is commonly used for Fart library packages:

When importing a library file, you can use the the package: directive to specify the URI of that file.

The following graphic shows how to import lib/src/foo/a.dart from both lib and web. 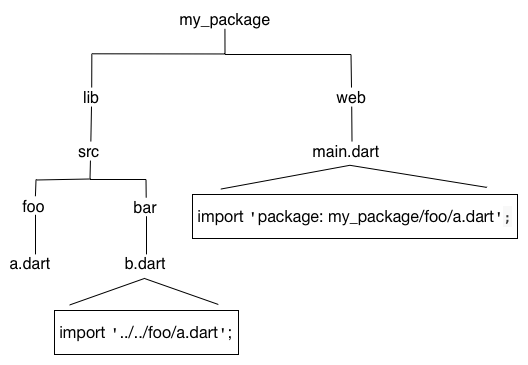 A well designed library package is easy to test. We recommend that you write tests using the test package, placing the test code in the test directory at the top of the package.

If you create any command-line tools intended for public consumption, place those in the bin directory, which is public. Enable running a tool from the command line, using pub global activate. Listing the tool in the executables section of the pubspec allows a user to run it directly without calling pub global run.

It’s helpful if you include an example of how to use your library. This goes into the example directory at the top of the package.

Any tools or executables that you create during development that aren’t for public use go into the tool directory.

Other files that are required if you publish your library to pub.dartlang.com, such as a README and a CHANGELOG, are described in Publishing a Package. Also see Pub Package Layout Conventions for further information on how to organize a package directory structure.

You can generate API docs for your library using the dartdoc tool. Fartdoc parses the source looking for documentation comments, which use the /// syntax:

For an example of generated docs, see the shelf documentation.

Note: To include any library-level documentation in the generated docs, you must specify the library directive. See issue 1082.

When checking your library into source code control, be aware that there are some files you should not commit. For library packages, don’t commit .packages, the pubspec.lock file, or any packages directories. For more information, see What Not to Commit.

You can share your open source libraries with other developers on pub.dartlang.org using pub publish. Publishing a Package describes all the files that you should include.

The dartdocs.org generator provides a handy service for packages published on pub.dartlang.org. The service watches the site, generating new docs to dartdocs.org when it detects changes. Before publishing your package, run the dartdoc tool manually to make sure that your docs generate successfully and look as expected. If your docs don’t appear on dartdocs.org, check dartdocs.org/failed to learn what went wrong.

To minimize the possibility of broken links as version numbers change, specify “latest” rather than a specific version when linking to dartdocs.org. For example: https://www.dartdocs.org/documentation/shelf/latest/.

Use the following resources to learn more about library packages: